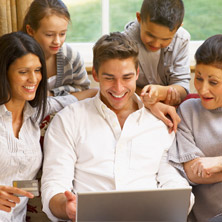 Most businesses realize there are 54 million people of Hispanic origin in the United States but when they look at the country’s largest ethnic minority are they truly seeing the Hispanic market? Consider these myths refuted by the Nielsen Company research into the media habits of U.S. Hispanics.

Myth One – Hispanics abandon Spanish television once they learn English
A prevalent view of marketers maintains that once people of different cultures become immersed in the American lifestyle they pursue their daily lives in English. The reality is that Spanish remains an important component in the daily lives of many U.S. Hispanics even after English is mastered. Bilingual households were found to spend 50 percent of their television viewing Spanish-language TV.

Myth Three – Hispanics are latecomers to technology, so online and mobile campaigns are not necessary
Nielsen research indicates that Hispanics own more smartphones than the general population, are heavier users of mobile, with higher average monthly bills than the general population. They are more likely to own a video and internet-enabled mobile device than the general population and stream twice as much video online. Mobile has become and will continue to grow as a core component of marketing programs targeting the U.S. Hispanic consumer. The most effective marketing messages are those that are easy for consumers to find and in the Hispanic market that translates to the inclusion of mobile friendly and mobile-driven communications in the marketing mix.

Hispanic Market News is out! news.marketingtohispanics.net

Connect with us to learn how you can engage Hispanic consumers on a meaningful level to build lasting relationships. It starts with the right message on the right device at the right time. Get started today.